If you missed my previous post, I am trying to work through all the challenges in the PaperCrafts Stamp It Card Challenges magazine. Here is #2. 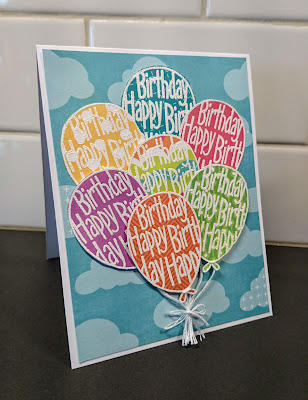 This balloon was from a Hero Arts set. I broke out an Echo Park paper pack and went to town stamping and embossing the balloons. Then I fussy cut them, attached some embroidery floss for the strings, and ta-da! I almost wish I made the card a little bit bigger so the balloons could be more "up in the air," but I was limited to a 6x6 paper pack sheet for the background. :)

Thanks for all the comments on my last post! It seems like I may need to make the leap to Instagram...maybe I will try it soon. Eek! New social media!!

You know, Meg. Meg Craig? I'm known for having a corgi. Now I have two. Luna on the left, Addison on the right: 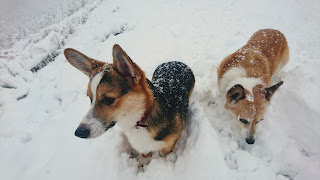 (Ok, ok, stop begging! I'll show you some puppy pics!)
But that's not why you came here, right? (BTW, thanks for coming here. It's been a while, hasn't it? Hope life has been treating you well.)

You came here for cards. And I'm going to try to make some!

Honesty time: It's been at least 5 years since I really was all-in on cardmaking. Teaching got in the way, then it was just SO HARD to come back to. I'd have some crafting spurts, but I couldn't remember how to do anything. Where anything was stored. Is that green River Rock or Certainly Celery? Ugh. So it was just A LOT of work every time I went to make a card. Then the card just wouldn't be as good as ones I made 5 years ago (I know, shocker right?). Plus I stopped following almost all stamping blogs and didn't visit Splitcoast, so I didn't even have much inspiration.

Challenge time: What I do remember loving the most were challenges. Not necessarily to win or get favorites, but just to stretch my mind. But I don't even know what the "hip" challenges are and didn't want to spend hours trying to find one. So here is my challenge to myself: 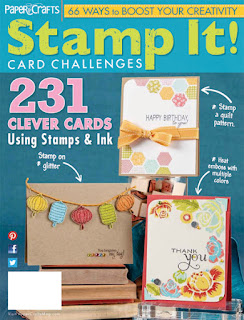 There are 66 stamping challenges in this Paper Crafts (RIP) mag from 2013. I'm going to try to attempt at least one a week. (Well, except the one that is "stamp on glitter" because this is a no-glitter household.) Feel free to join me! I'll post the challenge and the card and if you want to play along, leave a comment with a link to your card. I also just noticed that a hashtag would be #SiCC as in, man, did you see Meg's card? It is #sicc, bro! Is instagram a thing with stampers? Maybe this will finally make me join. (I am on twitter @mathymeg07)

Without further ado, I present

My Triumphant Return To Stamping
(that technically involved no stamps)

Challenge #1: Stamp an image in place of a letter Who doesn't love a good clean & simple card? Steps:
1. Punched a bajillion leaves using Martha's branch punch.
2. Iced hand for thirty minutes to recover from punching a bajillion leaves.
3. Used a circle nestie to trace a circle on the card, used a glue pen to glue the branches.
4. Tied the cutest little bow using red twine.
5. Went through all 300 fonts to find the best J and Y, sized them to match the wreath, and cut using the Silhouette.
6. Jumped for joy!

If you're looking for my math blog

You'll find it here: megcraig.org
Posted by Meg at 3:47 PM No comments:

1) We're updating our house.  It's about twelve years old and we've lived in it for seven, so we decided to do some upgrades.  Like our dining room, which went from this: 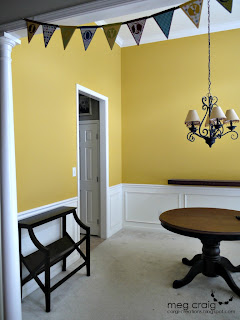 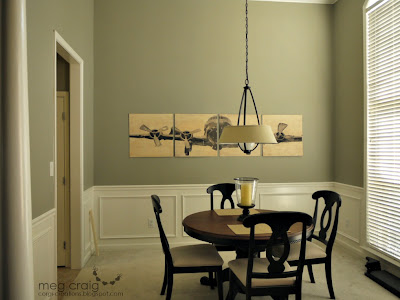 I don't even like yellow, but for some reason the original color never bothered me.  But now that it's gray....ah, I love it!  The color is Eddie Bauer "Beach" from Lowe's.  The lamp was a Lowe's clearance find.  The artwork? 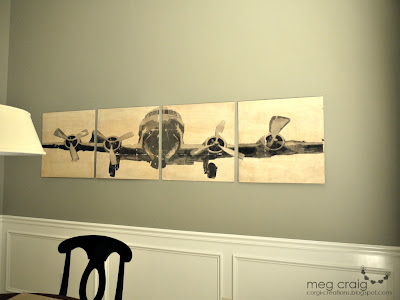 To paraphrase Mark Twain, "There are three kinds of lies: lies, damned lies, and craft blogs."  Ok, that's kind of harsh.  But seriously who are these magical elves out there where everything works on the first try?

I got the inspiration and print files from The Cre8tive Outlet whose tutorial was GREAT except for the tiny fact that it didn't work for me.  At all.  One big, soupy, inky mess. With tears.  So I went with the thousand other tutorials out there about using laser prints and gel medium.  It worked like a charm!  Except for the "rub off the paper 3-4 times" turned into "8-12 times."  Every time I thought it'd be the last rub-down, but then that evil haze would come back.  I also didn't modge-podge it because I wanted to be DONE with this project.  Anyone know if that's really bad, or just kind of bad?  Is it going to suddenly evaporate?

We're working on a few more projects, but I'll save those for another post.

2) We celebrated our fifth anniversary by taking a big vacation to Ireland!  It was fabulous.  I can't say enough about it!  I want to go back ASAP.  Here are just a few of our 1,400 pictures: 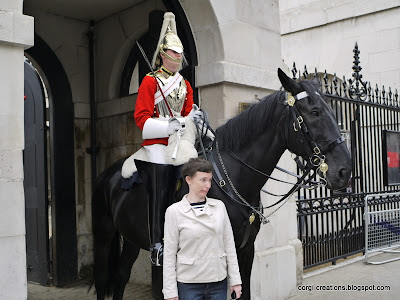 We did four days in London first (I think the horse was making some sort of "I'll get you, my pretty" movement when this picture was taken.) 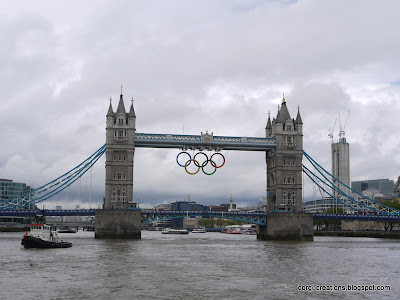 Hey, did you know the Olympics are going to be in London?  Because nothing was mentioned about it while we were there. 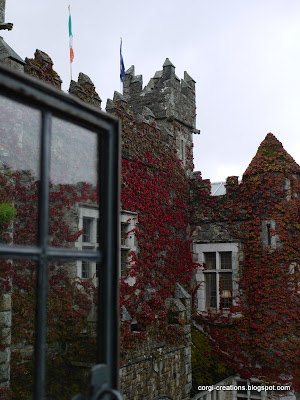 Just a view from our first night in Ireland.  What's that you say?  It looks like a castle?  Oh, maybe because IT IS.  Waterford Castle to be exact and it was AWESOME. 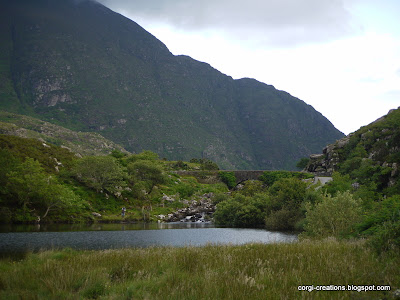 Yes, all of County Kerry is this beautiful. 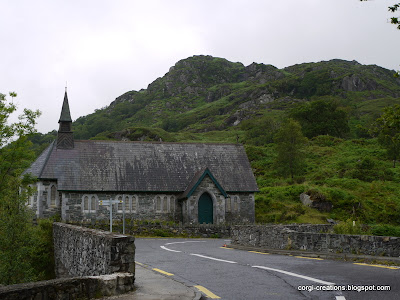 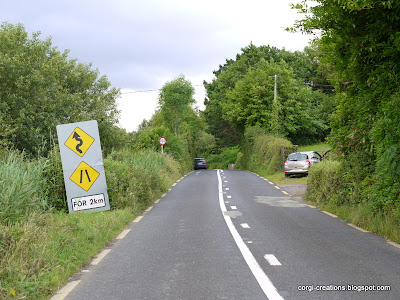 Plus what is up with their speed limits?  We started calling them speed "goals."  Also, this road is crazy-wide by Ireland standards. 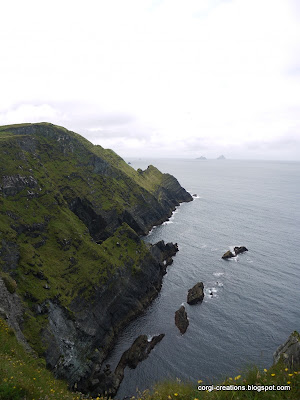 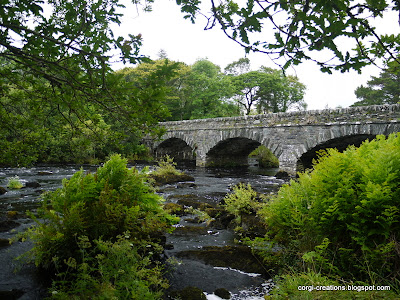 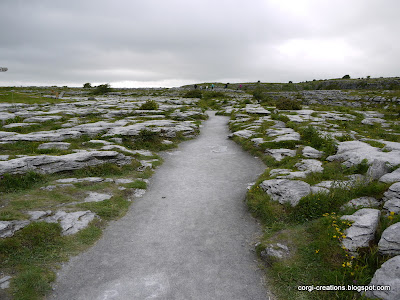 They even make big fields of rocks look awesome.  IRELAND IS MAGICAL. 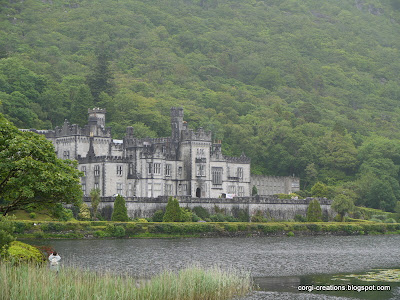 I WANT TO GO BACK!

Ok, I think this post is long enough for my first one back, don't you think?  I hope the past few months have been good to you!

Ah, Spring! Here comes the sun, along with:
COMMUNITY on Thursday
SPRING BREAK on Friday
TEMPS IN THE 80s this week.

Not only that, but I actually spent part of last weekend MAKING A CARD.

I have not made a real honest-to-goodness card for about 2 months (I had some occasions where a card was required, but I just sort of limped along and/or CASEd myself).  And then I was tasked with making a baby card for a coworker whose nursery theme is owls. 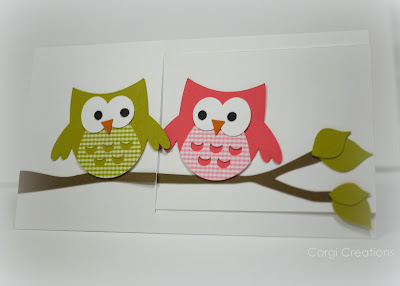 This was a Silhouette file; don't you love the (Amuse) gingham bellies?  I'm sure you do, but you're also wondering how this is a baby card?  Oh, just you wait.... 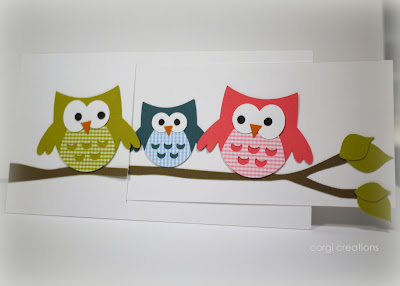 Oh, yeah, that card just pulled out to reveal a baby owl.  That just happened.  I used the same idea as my "I love you this much" card (I actually had to use my own tutorial to refresh my memory on it, so I'm glad I made it, if only for myself to use).

Thanks to everyone that dropped in to say 'ello during my blogging break (I wish I had a better excuse other than lack of mojo)--I hope to get back to commenting during Spring Break, and maybe even make another card or two!
Posted by Meg at 7:26 PM 27 comments:

Happy Chinese New Year (also: where have I been?)

First of all, Happy Chinese New Year!  After getting the hint that it is the year of the dragon, I made this card to send to Emily of Art from the Heart: 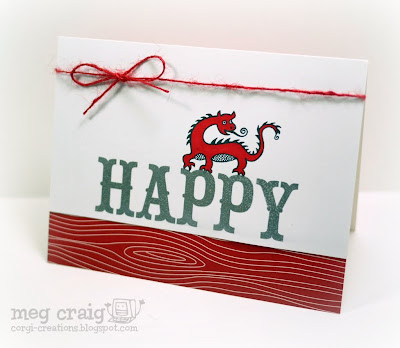 Things that make me happy:
1) A*muse woodgrain paper in red
2) silver embossing
3) the dragon's feet working perfectly with the letters
4) getting this mailed on time.
The dragon and sentiment are both from old A*muse.  I think both are still available from the new version, but "Happy" is being retired.

Other things that make me happy: 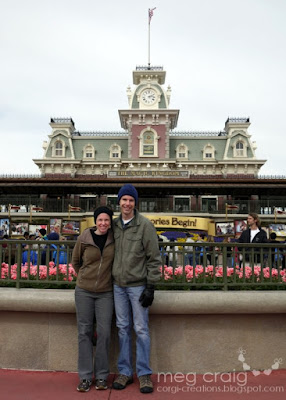 Yes, it's the Magic Kingdom!  Mr Corgi found a good airline deal, so we went over MLK weekend.  It was AWESOME (as usual).  I must admit the most awesome part was our hotel.  We use a credit card that gets us hotel points (with no annual fee, and we always pay off our bill every month, so it has cost us nothing) and this time we went all out and used them to stay at the Waldorf-Astoria.  This is what we got to see out from our balcony or window every night: 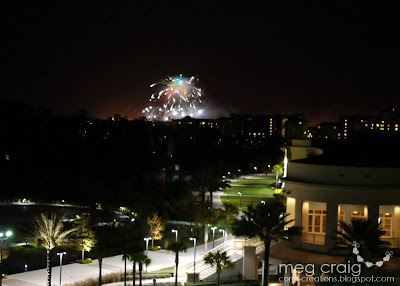 Pretty awesome, huh?  This was our view in the daytime: 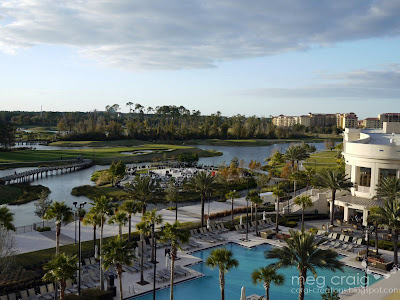 If anyone out there is planning a Disney trip, I would highly recommend The Unofficial Guide to Walt Disney World. By following the touring plans in the book (they even have little tear-out copies to carry), we rode every major ride twice and the longest we waited was about 30 minutes.

I just love Disney, but we also have love for SeaWorld, especially when there is a baby whale involved!  So I'll just end with that for today: 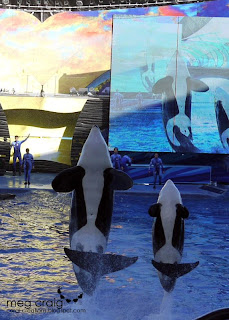 Meg
I'm a left brain/right brain math teacher/card creator. I'm married to a guy that makes me laugh every day and we have a corgi that makes both of us laugh. 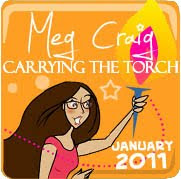 This work is licensed under a Creative Commons Attribution-NonCommercial-ShareAlike 3.0 Unported License.
All content including text, photographs and design work (unless otherwise noted) is © Meg Craig. They are for your personal enjoyment and are not to be copied for submission to contests or publications. If you are inspired by my work, remember to link with love. Thank you!